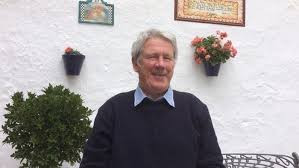 Henry wrote a bit when he was at university, but then life intervened.

“After college, I went to India with Voluntary Service Overseas. I stayed for a year, teaching English near Calcutta.

When he returned, he became a barrister. But the idea of writing was niggling away.

“When I was in my mid-forties, I got an idea for a series – A Rumpole of the Bailey kind of thing,” he says. “I set it around a young barrister in Dublin, and I got a book of stories together.”

“I had no plan to stay on longer,” he says. “But after that year I retired from the Bar. My wife Mary and I are still here.”

Who is Henry Murphy?

In Another Life: “I’d like to have been a writer throughout – but I’m delighted to be giving it a bash now. And I’d loved to have played more Rugby.” (He toured with the Irish Rugby Team in Argentina in 1970.)

Second Novel: “I have a fourth collection of stories almost ready to go.”

Top Tip: “You need perseverance. Editing is vital. Don’t be embarrassed about tearing it up.”

The Verdict: An utter delight. Heart-warming and funny.

Published in The Irish Examiner on 22nd August.