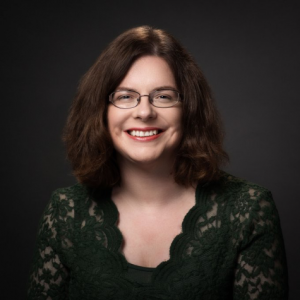 Helen decided to become a writer at eight years old.

“I read an Amelia Jane book by Enid Blyton, and realised it was what I wanted to do. I wrote my first book at 11. It was terrible, but I haven’t stopped writing since.”

Helen moved to Dublin from Cork in 2006 and has stayed in Dublin since.

“I worked as a bookseller for Dubray Books until 2018. And I was writing the entire time.”

Helen took some courses with the Big Smoke Writing Factory and wrote a book which received interest from agents.

“But they said it wasn’t the right book.”

“It took me five years to write, revise and pitch it.”

Now in reprint, Queen of Coin and Whispers was shortlisted for an An Post Irish Book of the year Award.

Who is Helen Corcoran?

The Day Job: In an office job.

In Another Life: “I contemplated becoming an archivist. I love history.”

Second Novel: “I’ve almost finished another YA novel, and a fantasy novel for adults, a retelling of the 3 Musketeers.

Top Tip: “The hardest thing is to finish a draft. And that’s the most important thing.”

When new Queen, the teenage Lia, employs a new spymaster, Xania, the two fall passionately in love. Faced with dangerous plots and hidden enemies, can they learn to rely on each other?

In a world where the throne means power and duty they have to decide what to sacrifice for their country, and for each other.

“I wrote the fantasy book I wanted to read at 16. I liked the concept of a princess who wanted to be queen, but loving a woman, couldn’t fulfil the expected duties. Readers have said it’s good to see lesbian characters in a YA book.”

The Verdict: Rich, clever, and compelling.

Published in The Irish Examiner on 2nd January.