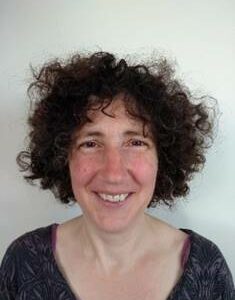 Becoming a writer has been a long-held ambition for Harriet. But being, also, interested in the analytical side of theatre, she chose to study drama with English.

“I liked getting inside people’s heads through drama improvisation, but I knew, pretty early on that I was not going to be an actress.”

After university, in 1993, Harriet worked a writer in residence in the Isle of Wight.

“I was based in St Mary’ Hospital in Newport,” she says. “I worked with ill people, encouraging them to write. I loved it.”

Then, after travelling with her partner, she became a registrar, registering people’s births marriages and deaths. It’s a post she still holds today.

“I love seeing all the different people coming in,” she says. “You see people from every walk of life, and every emotion from joy to pain.”

Meanwhile she was writing in fits and starts – but having no confidence, she felt she had nothing to say.

“I stopped writing when my children were small, and that was when I realised that I needed to do it.”

She started with short stories. Harriet has won the HISSAC short story competition and the London Magazine Shirt Story Competition. Her stories have been widely published, and broadcast on BBC Radio 4.

Who is Harriet Kline?

Family:  A partner, two teenage boys and a cat, Ivy.

In Another Life: “I’d love to have a smallholding with goats, sheep and cows.”

Second Novel: “I have something in my mind. It may involve dogs.”

Everyone loves Rich; he lights up any room, and his early death sparks devastation. Can his wife Ruth, and troubled son Ollie move through grief, to an appreciation of the legacy the ebullient Rich left behind?

“I hope readers love the characters despite their flaws. And realise that, although they’re annoying, they are simply striving to find their way through.”

The Verdict: I loved this exquisitely written novel for its poignancy and terrific characterisation. Rich’s joyfulness in life is unforgettable.

Published in the Irish Examiner on 3rd July.