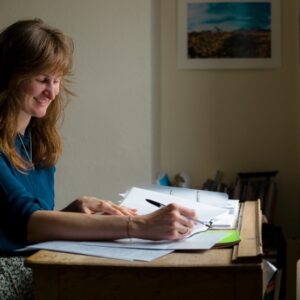 Grace’s father ran a beatnik bookstore in Greenwich Village, so shegrew up around ageing poets.

“Ted Jones used to visit my family, and he asked me about my dreams – then he made up poems for me. He was the first person to take my imagination seriously.”

Grace hasn’t Irish roots, but her dad had a lot of respect for Irish culture.

“We had a rubbing of Yeats’s grave – and he was friends with the Clancy Brothers”.

Her parents died before Grace was college age – and after her degree, feeling adrift, she followed her heart and moved to Ireland.

“I was 22 with no visa or job. Undocumented, I waitressed in Mario’s Restaurant, Sandymount.

“After two years, when my visa came through, I began working in women’s reproductive rights. In 2008, the issue was still difficult and hidden. Over the years it involved a lot of travel.”

Still an activist, Grace now concentrates on anti-racism, and is on the board of the Irish Network Against Racism.

She started working on The Limit of Light in 2016, when her editor, noticing her poems in The Irish Times, asked to see more.

“In 2018 I wrote little because I was so caught up in the Repeal the Eighth referendum campaign. But the following year the Arts Council awarded me a grant, and freed up, the collection came together.”

Who is Grace Wilentz?

In Another Life: “I dream of becoming a doctor, so I could help people through more concrete care.”

Second Book: I’m working on one now. Its theme is love and care.

Top Tip: “Have faith in yourself and the work. What at first makes you unusual, can become your signature”

These beautiful poems – sometimes experimental, always subtle, range in subject from death and grief to small moments of living.

The Verdict: Original, lyrical and illuminating.

Published in the Irish Examiner on 14th August,