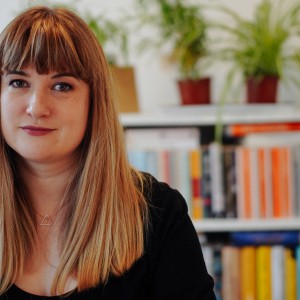 As a young child Francine lived in Canterbury, London and Portugal, but at nine, she moved to the Scottish Highlands, before finally settling in Fife.

“I loved the highlands and found it inspiring. Friends at school would tell ghost stories and urban legends, and then I started taking control – telling stories and embellishing things.”

When she was at University Francine was involved in student journalism, but she got an internship with Chambers Dictionaries, who were based in Edinburgh at the time.

“That was the starting point for my career in publishing,” she says. “I went on to work with Hodder in London and have stayed with the group ever since.

“My job has been an advantage, as a writer, in that I’m constantly reading, and having to articulate what I think makes a book work, and what doesn’t; but having a full-time job makes the work life balance difficult. It took me 3 to 4 years to write Pine.”

Her poetry, written as Francine Elena, has appeared in several anthologies.

Who is Francine Toon?

Family: Parents Annie and Steve,  a younger sister, Charlotte, and boyfriend, Yassine, from Glasgow. “He also works in publishing.”

The Day Job: “I’ve been a commissioning Editor for Sceptre for the past 3 to 4 years.”

In Another Life: “I’d love to be an artist. I once wanted to go to art school.”

Second Novel: “I have an idea for a second book. It’ll be based in a town like St Andrews, and be about a girl who has just finished high school, and is drawn into a strange group of students.”

Lauren lives with her father in a village surrounded by a forest. It’s a place where strange things happen – including the disappearance of Lauren’s mother. Can Lauren trust her neighbours?

The Verdict: Mesmerising! A spooky, atmospheric coming of age tale with characters you truly care about.

Published in The Irish Examiner on 1st February.