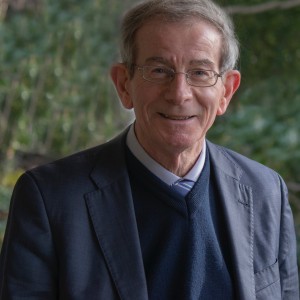 The eldest of five, Finbar spent the first two years of his life in England.

“But in 1950 my father worked as a dispensary doctor in County Meath. Then we moved to Edenderry.”

He met Kate McGarry at university, and after some training in Dublin, he followed her to London, working there for two years.

“She was brighter than me – a medical star! I worked in various hospitals. We came back to Ireland, briefly, then we went to Edmonton in Canada for twenty months. Kate was a clinical fellow in cardiology. I worked at the university, in research.”

When Fintan secured the post of surgical consultant at The Lady of Lourdes Hospital, Drogheda in 1983, Kate followed him, as a consultant at Navan Hospital.

“I worked in Drogheda until my retirement in 2012. For the latter part I also performed breast surgery at Beaumont Hospital, and at the Mater.”

Before Kate’s death in 2018, she told Fintan she was writing a book about dealing with cancer from a doctor’s perspective.

“I knew she wanted me to finish the book.”

He spent six months going through Kate’s diaries, then he attended a memoir class. Writing for 12 hours a day, 4 days a week helped him through the grieving process.

Who is Dr Finbar Lennon?j

The Day Job: Teaching medical students in the Mater and UCD for two mornings a week.

In Another Life: “I’d have been a priest. There are many in my family.”

Favourite Writers: Alice McDermott; CS Lewis; TS Eliot, and Ezra Pound. “I like medical memoirs and I read a lot of poetry.”

Second Novel: “I’d love to write a book of poems, but also write about them, to put them in context.”

Top Tip: Listen to yourself and be yourself.

This moving memoir takes us from Fintan and Kate’s meeting, through their marriage; through Kate’s diagnosis and death from cancer; to Fintan’s grief and ultimate recovery. It includes some poems by Fintan.

Published in The Irish Examiner on 13th June.