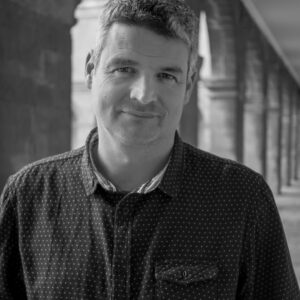 A screen, stage and Radio writer, Eugene was always into stories.

“As a child I was obsessed with the cinema. I was never ever going to do anything else.”

Starting out as a jobbing actor, at The Abbey Theatre, and in independent films, Eugene did a spell on Fair City.

“I was a good performer, but felt I wasn’t a great actor, and would not progress.”

He’d written Eden, while he was acting, and its success, in the Abbey Theatre, and on Broadway changed everything. Eugene won the prestigious Rooney Prize.

There have been ups and downs over the years.

“A show I wrote for the Savoy crashed and getting money to get films made is always hard. I developed Pure Mule over 2 years. Channel Four dropped out, but RTE agreed to shoot it alone. Broadcast in 2005, it really took off.”

It was shown again during lockdown, and, seeing it, Gill Books approached Eamon asking for a novel, and, wanting to get back to chronicling smalltown Irish life, he decided to write a sequel to Pure Mule.

“I’ve just made Tarrac, an Irish Language Film, and Heaven, showing at the Dublin Theatre Festival, and in New York in January.”

Who is Eugene O’Brien?

In Another Life: “I’d probably have been a teacher. I do a lot of mentoring.”

Second Novel: “I hope to write another, but my next projects are in film and drama.”

Top Tip: “Find a rhythm for your writing days, but don’t panic if you don’t produce too much.”

Once famous for the craic and drink, Scobie Donoghue has returned home from Australia after a bad breakup. Nearing 40, living with his mother, he’s feeling burnt out and depressed. Can he banish his demons and finally grow up?

The Verdict: There’s a poignancy and sweetness at the heart of this story. I loved it.

Published in the Irish Examiner on 1st October.