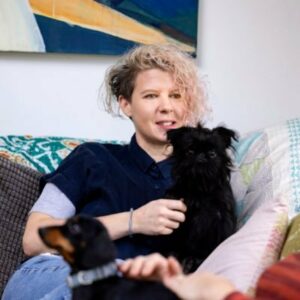 An avid reader, Ericka devoured books from the library.

“If I didn’t like the ending of a book, I would rewrite it,” she says. “I was good at rhyming poetry, and I wrote songs for school plays.” She also wrote obituaries for people who died in her village. “The average age there was about 80. I also wrote poems for the graves of our rabbits and hamsters.”

Ericka suffered from anxiety as a teenager and didn’t manage well in exams.

“I left school after GCSE and fell into marketing. But 11 years ago, when I was pregnant with my second child, my friend had an aneurysm at work, in front of me, and died leaving three young children. I thought, I’ve got to grasp life now.”

She trained as a journalist and began to write blogs and an award-winning weekly column for Brighton’s newspaper, the Evening Argus. She wrote an unpublished novel, and then got accepted onto a Faber Academy course by submitting the first chapter of Dog Days.

“I wrote the book while I was there.”

After a professional edit, Ericka gained her choice of agent, and garnered a good pre-emptive two book deal. Dog Days also sold to America and Italy.

Who is Ericka Waller?

Date of birth: 1981 in Hertfordshire.

In Another Life: “I’ve always wanted to pick music for films.”

Second Novel: “I’ve had a stab at a few and am working on an idea.”

The cantankerous George is angry because his wife has died and left him; Dan is too shy to succumb to love; and Lizzie, living in a shelter with her small son, is hiding a shocking secret. The three are linked by the dogs, who, wanted or not, force them out of doors to the Beacon.

The Verdict: A glorious read full of love and humour, yet there are dark issues at its base.

Published in the Irish Examiner, on 20th March