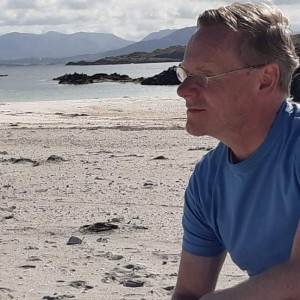 Eoin won his first art competition aged six. And at seventeen, following his father’s death, he won a Francis McManus inaugural award for a short story.

Spending childhood holidays in Connemara, he loved painting the landscape.

“I attended a class at Renvyle House Hotel, and I joined an Art Group in Mount Merrion.

“I always saw things visually,” he says. “Images stay with me. I see everything from an art design and literary perspective.”

In college, he won an award, and became an intern for Vivienne Westwood, before taking his final degree.

After Art College, Eoin worked in fashion design, in New York, New Hampshire, Seattle and London, ending up with Woolmark Company as a knitwear designer.

Being made redundant, he worked in PR, and then, in 2003, studying horticulture, he moved to County Down, and worked at the National Trust Property, Mount Stewart.

“I became in charge of the formal gardens, bringing it back to life with the original plants. I started painting again while I was there.”

In 2011, along with his partner, he set up a bistro in Greyabbey, County Down,

Meanwhile, he had been writing short stories and a novel. He won a place at the Irish Writer’s Centre Novel Fair in 2016, and gained the agent, Paul Feinstein. But that novel failed to sell.

Who is Eoin Lane?

The Day Job: Writer and landscape artist. “And pre-covid, I gave Art tours, and garden tours at Hillsborough Castle.”

In Another Life: “When I was young I wanted to be a Franciscan monk.”

Top Tip: “You need a lot of self-belief, self-awareness, and an ability to critique your own work.”

An artist with natural talent, Colin lives through his senses. There are tragedies, love affairs and betrayals, but its his art that carries his life along.

The Verdict: This beautiful, poetic debut delves into the creative process. I adored it!

Published in The Irish Examiner on 26th December.