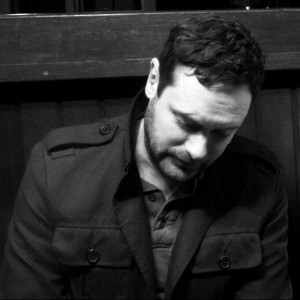 Brought up in Balinteer, Eoghan was a prolific reader.

“I wrote terrible poetry as a teenager, but any other writing I tried, never worked out.”

He pursued an academic career, working in a video shop between times.

“I moved to Maynooth to take a PhD. I did a lot of teaching and lecturing for the university, and took on lots of TEFAL (Teaching English as a Foreign Language,) to sustain myself.”

He then worked in the English department at Maynooth’s Kilkenny Campus, before transferring to Carlow College.

“I’ve been there for the past seven years.”

Along with numerous published reviews, essays and articles, Eoghan has produced a full-length study on the novels of John Banville.

The idea for the debut came when, studying in UCD, he was living in a rundown basement flat.

“I had an unusual landlord who kept popping up.”

Who is Eoghan Smith?

The Day Job: Programme Director in Arts and Humanities at Carlow College.

In Another Life: “I’d probably be a musician. I play the piano and the guitar. I was in rock bands as a teenager, playing punk and indie stuff.”

Top Tip: Find a good, quiet space to write in. “I go to libraries.”

A graduate student is living in a rundown flat, whilst he struggles to finish his dissertation. He’s trying to answer a question without being sure quite what the question is, and his disenchanted supervisor is on his case.

Meanwhile, all around him is the stench of death and decay. He’s lost his mother; is avoiding his father; his pregnant ex-girlfriend has a new love, and his only friend is taking solace in bird watching. Broke, and steeped in melancholia, can he manage to recover and survive?

The Verdict: Brilliant! Dark and atmospheric. It’s a compulsive account of how it feels to be tortured and mired in anxiety.

Published in The Irish Examiner on 17th November