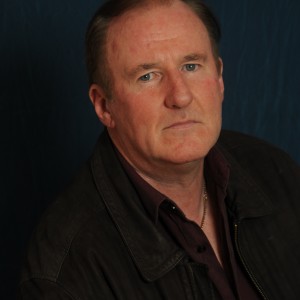 A lifelong reader, Eoghan has been writing since he was ten years old.

“My father was a farmer and a rent collector. My earliest memory is of sitting his knee and him reading stories to me.”

After university, deciding that the subject of his degree – computer programming – did not suit him, Eoghan worked in sales and marketing.

“I started as a sales rep and worked my way up to sales manager; at one stage I was a general manager. I’ve had five or six different jobs in the course of my career.”

“I write every night. I wrote two, very bad books, before writing this debut.”

Hiding in Plain Sight was inspired by a serial killer in North Carolina.

“I based the book there, but then realising I didn’t know enough about its geographical landscape, I switched it to the North of England. When that still didn’t feel right, I set it in the Irish midlands. By 2012, I’d written the book so many times that I thought it was done.”

It wasn’t! Taking several creative writing courses, Eoghan found a mentor, and wrote a further 10 drafts with her, and with various editors. And in 2017, he honed his craft further during a year’s evening writing course at Maynooth University. He also wrote short stories; two have been shortlisted in competitions.

Who is Eoghan Egan?

The Day Job: Sales and marketing in a pharmaceutical company.

In Another Life: “I always wanted to be a librarian.”

An art dealer with a successful business has murder on his mind. As he casually kills, selecting his victims randomly, his confidence grows. He has found the perfect recipe for murder, leaving no trace behind, but will his luck hold out?

The Verdict: A page turner with twists and sub-plots that stars a psychopath.

Published in The Irish Examiner on 4th January.