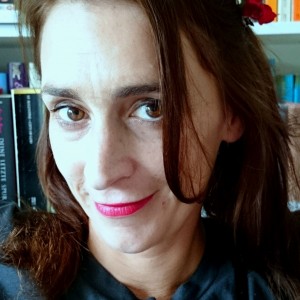 As a child, Emily listened to the sound of the type-writer, as her father, a professor of film studies, wrote books on the subject.

“I always wanted to write, and wrote terrible poetry as a teen, but I went into journalism because that seemed more realistic.”

After college, she worked for an art gallery before joining The Guardian, where she stayed for four years.

“I never really liked it. I asked the travel editor if I could go off backpacking and write a column about it and she said yes. I went off for a year and started a novel while I travelled.”

She’s written 12 psychological thrillers for adults, but the 13th would not gel.

“I woke one day obsessed with the Arctic, and went there for 6 days feeling disorientated. The idea for a character began to form. Writing for YA feels completely different.”

Who is Emily Barr

Date of birth: 1971, in York but brought up mainly in Norfolk.

Education:  Norwich High School; Courtauld Institute; History of Art. “I spent all my time working on the student newspaper.”

The Day Job: Writer and some teaching.

Second Novel: Another YA, mainly set in Rio.

Top Tip: Don’t stress about your first draft. Just do it. After that, it can only get better.

Flora is 17, but keeps imagining that she is 10. She’s pretty, but comes across as rather weird. And that’s because she has anterograde amnesia; a condition that makes her forget everything that has happened to her since she was a child.

She has coping mechanisms; writing messages on her arms. The main one is, ‘be brave.’  Then she kisses a boy, and remembers. When he goes to study in the Arctic – she follows, blindly, trying to track him down. With no pills, and amongst strangers, will she survive?

“It’s about living for the moment; it’s all you’ve got.”

The Verdict: Simply superb; both clever and poignant. Flora is enchanting. I loved it!

Published in the Irish Examiner on 21st January, 2017