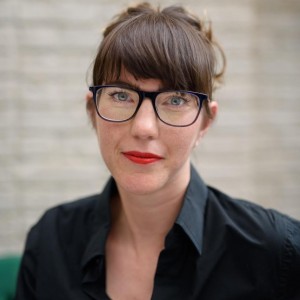 Starting life in Dublin, Emilie’s family moved to London when she was a teenager, where she  dropped out of school and became a ‘wild child.’ At 16, saved by a private school, she gained a scholarship to TCD.

“I graduated from a PhD in 2005 and went travelling for a year on a round the world ticket.”

She then worked as a lecturer in drama in the English department at York University. After two and a half years she returned to Ireland as lecturer in modern drama at UCD.

“That was ten years ago. I’m now an Associate Professor.”

In 2011, Emilie published an academic book on Irish memory.  She wrote her first essay for the debut in 2014, after living the trauma of her father’s year of liver failure.

“I needed to get my thoughts on paper. I put it in a drawer, but my partner found it and said I should publish it.”

Tramp Press persuaded her to write the book of essays, even though they had never before published non-fiction.

Who is Emilie Pine

In Another Life: “I’d love to work in the natural world. I’d be a marine biologist, or a mountain climber.”

Favourite Writers: Virginia Woolf; Ariel Levy. “The rules do niet apply was hugely influential when I was writing this book.’ Louisa M. Alcott.

Top Tip: “Clear the first few hours of the day, and put your writing first.”

From living with a parent’s alcoholism, suffering an eating disorder, living some drug-fuelled years, and dealing with infertility, Notes to Self contains intensely personal anecdotes; yet the emotions, insights and treatise on generally unmentionable subjects will surely resonate with women everywhere.

“The collection is about trying to break a silence and acknowledging that we can be contradictory.”

The Verdict: Absolutely superb! I adored this collection.

Published in The Irish Examiner on 14th July