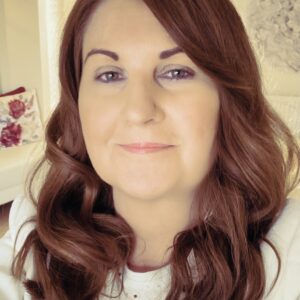 Elaine comes from a family of storytellers.

“My grandmother told us imaginative stories, and my grandfather told us about his travels at sea. I believed they were true for a long time!”

She started writing as a young teenager, when she was given a diary with a key.

“And I was always a big reader,” she says.

Elaine’s first job was a lecturing post at Bangor University.

“I set up the Spanish department. Then in 2005, I moved to Swansea University as a lecturer in Hispanic Studies. Five years later I became head of Arts and Culture. I’m now in special projects, and in charge of the Dylan Thomas Prize.”

She now taking a PhD in Creative Writing.

“I feel more comfortable writing creatively, than academically,” she says.

Who is Elaine Canning?

The Day Job: Head of Special Projects at Swansea University.

In Another Life: “I’d love to live in Spain, and either own a book and coffee shop, or a language academy.”

Second Novel: “I’m working on a collection of short stories on the theme of communication. Three stories have been published in Welsh magazines.”

Top Tip: “Believe that your voice has value, and don’t be frightened of the hours when you sit but don’t write. Thinking time is important.”

Belfast man, Michael Doherty, lies in an open coffin, listening to the mourners at his wake. He’s not ready to pass over yet. There are ghosts to visit in Salamanca, where he fought in the Spanish Civil War. And he’s worried about his granddaughter, Sarah, who seems tormented since her return from Spain. Why didn’t she settle there? Will he find out, and be able to leave in peace?

The Verdict: An evocative tale bringing Salamanca alive. It tackles love, regret and grief in a new way.

Published in the Irish Examiner on 5th November.