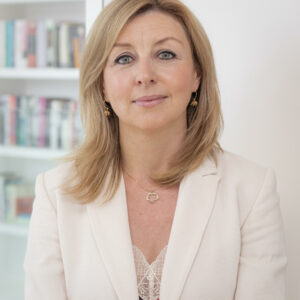 “I got into journalism as a pragmatic response to a romantic dream of being a writer,” she says.

After doing placements at The Tribune during her degree, she worked there for six years.

“I was also playing in a band and freelancing for the Irish Independent. And in 2008, I moved to the Indo fulltime. I ended up editing the Saturday Magazine.”

She then freelanced for RTE, working five shifts a week –but after a couple of years, she left, wanting security, and became Publicity Manager with Hachette.

“It was a great job, but I missed the stress of journalism. I went back to freelancing with RTE and the Irish Independent.”

In 2016, Edel moved to Galway setting up home with David – now her husband, his sons and their 5-day old daughter. A second daughter soon followed.

“It was a culture shock. I was still Books Editor of the Irish Independent, but I lost myself. I wondered how people managed to do it all, running from minute to minute.”

That’s when Edel embarked on her debut.

“I’d had approaches from publishers before, but never sent them anything. Now, writing a novel was my only goal.”

Who is Edel Coffey?

The Day Job:  Journalist and writer.

In Another Life: “I’d be a hairdresser. It’s such a fun job and I love talking to people.”

Top Tip: “Write now! If you wait, because you want perfection to come, you’ll still be waiting in 10 years’ time.”

When high-flying doctor and mum of two, Susannah, forgets her baby, and she dies in the car, a witch hunt ensues. But new mum Adelaide, reporting the case, starts to feel a kinship. Will the court find Susannah guilty?

The Verdict: Absolutely brilliant! A compulsively readable parable about the stresses of modern life.