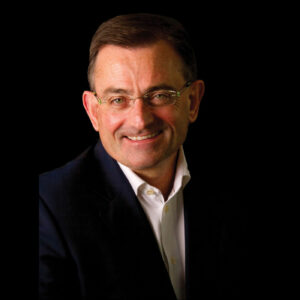 Eddie comes from an artistic family.

“As a child I was always happy to entertain,” he says. “I was a ventriloquist for a while.”

Leaving school at 16, with his Leaving Certificate, Eddie worked for Cork Corporation in the Roads Department, but studied at night, taking his financial exams.

“Then I transferred to an insurance company on the Mall,” he says. “I loved life there.”

After his father’s death, when he was 19, Eddie became an insurance inspector ending up in Dublin working for Zurich Life – first in training and technical services, then in marketing.

“And at 28, I set up a fee based advisory service company.”

Eddie became a household name as a financier when he presented the series Show Me the Money on RTE. He followed this, in 2005, with Rip Off Republic.

He has written five books on finance. And in 2015 he co-founded the political party RENUA.

“I’ve always liked the idea of writing fiction,” he says. “And I’ve always had a love of history. When I was walking the roads during lockdown, I was thinking about our need to reconnect. I devised the plot. I enjoyed the process.”

Who is Eddie Hobbs?

In Another Life: “I’d adore to be a fulltime writer.”

Second Novel: “I’d like to write a sequel – if this one is a reasonable success.”

Top Tip: “This is a difficult marketplace. Be prepared to back yourself.”

The first heresy, smuggled out of Egypt, is revealed to a Norman youth, Cormac in Ireland centuries later. It sets in motion a brutal clash between church and state, as a small group, led in France by the Persian scholar Esi, is hunted by the army of King Philip IV.

The Verdict: A fast paced thriller which combines Christian History and Mysticism.

Published in the Irish Examiner on March 5th.