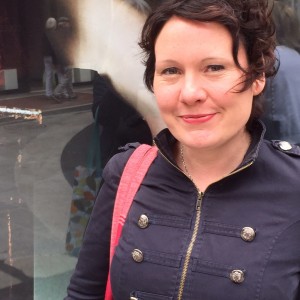 From a difficult background, Elizabeth excelled at school.

“Books were my sanctuary.”

Working to put herself through university, she then became a primary school teacher, working with children with special needs and emotional problems.

After six years, wanting to travel, she worked for an online gaming company, living in Jamaica, Spain, Gibraltar, and other places before moving to Dublin in 2008 to work for a poker company.

Elizabeth started writing seriously in 2009, having taken some workshops, and discovered the writing community.

“I had been trying to write a memoir of my father, who I met for the first time as a teenager. But Ebony Smart and Icarus Bean got into my head and demanded to be written.

The Day Job: Freelancing for on line gaming.

Interests:  Travel. Fishing. Gardening. “I always have a flight booked. This year I’ve been to Cambodia, Poland and Carcassonne, and last year we spent six weeks in Thailand.”

Second Novel:  Caramel Hearts, out next March. And the second book of the trilogy, comes out next August.

Top Writing Tip:  There’s no room for procrastination, you have to persevere. And that means taking rejection, and writing another book and another.

Ebony Smart lives with her grandfather. When he dies, she is sent to Dublin to live with an eccentric aunt, and misses her old life. Then she discovers she is part of an ancient order of people who have the power to reincarnate. Finding out that the order is in danger of extinction, she sets out to save the day.

“The theme is belonging, which is so important for children. I was ‘saved’ by my best friend at school.”

The Verdict: An exciting yet thoughtful story for 8 – 12 year olds.

Published in the Irish Examiner on 3rd October.