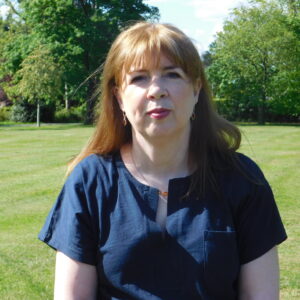 Leaving school at 16, Eirin moved to London – then travelled a bit before returning to Northern Ireland where she trained as a journalist.

“I worked as a local reporter for some years, and I loved it. It was a great training. But I gave it up when I had my family and stayed at home until they finished primary school.”

She wasn’t idle. Having gained a degree and MA, she wrote two published comedy dramas about small town life, but lost heart when her third novel wasn’t accepted.

Eirin then retrained in learning and development and worked with children and young people for some years.

5 years ago, off work having surgery, she submitted 3 stories to women’s magazines and had one accepted.

“That set me off on a new career.”

This escalated, and she now has 100 stories published a year.

“Two years ago, I decided to give up the day job and write full time for a series of magazines including long serials lasting for 30 instalments.”

This reignited her confidence, and she wrote her debut crime novel.

Who is E.D. Thompson?

Date of birth: 1967 Born in Bangor Wales. Brought up in Hillsborough, Northern Ireland.

The Day Job: Fulltime Writer of short stories and novels.

In Another Life: “My sister in a doctor; I think that’s the noblest calling in the world.”

Top Tip: “Do not show unfinished work to anyone. Complete it first.”

Lacking romance, Alice is intrigued by her neighbours Kevin and Kim. But when she sees Kim in London, when her husband swears she’s in Galway, her suspicions are aroused. Is Kevin up to no good?

She decides to investigate, but who should she trust?

The Verdict: I loved this intriguing mystery for its compelling characters, warmth and heart.

Published in the Irish Examiner on 21st August.