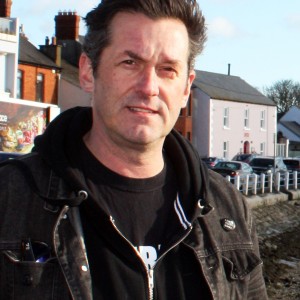 A hyperactive, over-imaginative child, David haunted the Exchange Bookshop in Dalkey as a kid.

“I particularly loved anthologies of horror.”

Brought up by his grandparents – believing, at first, that his mother was his sister, David met his American father in his twenties.

“A former roadie, he was an inventor in special effects. It was every adopted person’s dream come true.”

After theatre school, he worked with an acting group, taking plays to primary schools. Afterwards he got various gigs, including one with the Kirov ballet, and as a stripogram vicar.

Sidestepping into journalism, David did copy writing shifts, and wrote freelance pieces, mainly for the Evening Press, but in 1991, when there was little work, he and his girlfriend, Emily, went to California.

“I worked for Brilliant Cards doing layout, design and duplication. We married there and our first child was born.”

Returning in 1998 David worked for the Evening Herald. He stayed until 2009 after five years as Features Editor.  Then, frustrated by the long commute, he bought a small community paper, expanded it, and set up a company in book design.

Who is David Diebold?

The Day Job: Co director of a publishing company which runs Skerries news.

In Another Life: “When I was 14, I really wanted to be an archaeologist or geologist.”

Second Book: Diary of a Wimpy Dad – an edited, repackaged, selection from Family Guy, the column David wrote for the Evening Herald. “Then I want to write auto fiction to flesh out nostalgic mid 1980’s Dublin.”

Top Tip: “Get what is in your head out in a ‘vomit’ draft to get your story out. Then go back and tweak it.”

These 52 vignettes portraying David’s unconventional life, examine family dynamics, but also take in his brushes with celebrity and his, sometimes, whacky career choices.

The Verdict: At times funny, at times sad, this deeply emotive collection brings surprises on every page.

Published in The Irish Examiner on 7th March.