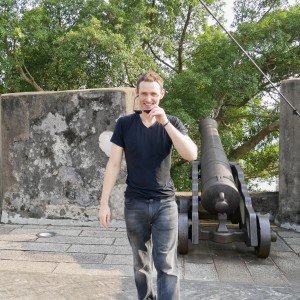 David read everything he could, as a child, and in his teens he loved poetry.

“I wrote my first poem when I was on detention,” he says. “I loved Emily Dickinson and John Milton, but, playing hurling and hanging out with the bad kids, I kept that quiet.”

David’s ambition has always been to escape.

“I left Ireland in 2002 and ran away to Tokyo until 2014. I taught English, and for a while, Physics in High School, but I took a year off and played music and busked.”

Returning to Ireland, he lived in Cork, before heading to Canada, and then China.

Shortlisted for numerous awards, David was one of the winners of the Novel Fair 2018.

He started his debut in Manchester in 2016, writing his first draft in 10 weeks.

“The idea came from the diary of a Japanese Professor of Maths I taught ten years ago. Written in broken English, it was interspersed with facts. That interesting voice stayed in the back of my mind.”

Who is David Brennan?

Date of birth: 25th September 1976 near Thurles in County Tipperary.

Family: Parents, five siblings, and lots of nephews and nieces.

In Another Life: “I like extremes. I’d work as a monk or a lighthouse keeper, or as a hit man.”

Second Novel: “I’m writing two; a sequel and a novel set in a language school in China.”

Top Tip: “Turn up every day; have a set routine and stick to it rigidly.”

In Upperdown, the professor struggles to prove the Rieman Hypothesis, but he’s disturbed by The Piano Man. In ridding the town of rats, is the stranger setting something darker in motion?

“We shouldn’t place too much emphasis on what is scientific or provable. Doubt is necessary. You need a willingness to say you don’t know what is going on.”

The Verdict: A unique voice; original, stylish, and highly readable.