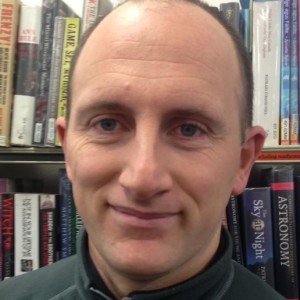 After college Damien spent time in Australia before moving to England, where he taught IT in Nottingham, and then Birmingham. Whilst teaching, he met at archivist, and became fascinated in the skill, so, after returning to Ireland, he took a one year Post-Grad course.

“That was an intense nine months working twelve hour days. I was the only student who hadn’t a PhD or work experience, but IT was a major factor. With digital archives we have to know how to preserve Facebook and Twitter.”

He then joined the Jesuits as an archivist on a one year contract. That was seven years ago.

Four years ago, Damien put up a website briefly profiling the Jesuits who had served in World War One. There was a lot of interest, and that gave him the idea for the book.

“Writing one of the profiles, and managing everyone else’s has been a real learning curve. I was a facilitator, as well as an editor, providing the contributors with key contacts and documents.”

Who is Damien Burke

Family: Wife Julie – we met in Nottingham, and son Ruadhán, 2, and daughter, Stevie, 1.

The Day Job: Archivist for the Jesuits.

Interests: Sports; Watching Gaelic Hurling and Rugby; I cycle to work and back, 20K a day. Hill walking.

Second Novel: There will another book at some stage, and it will be based on the material in the archives.

Top Writing Tip: Never underestimate the amount of work involved. And remember that less is more.

Thirty-two Irish Jesuit Chaplains served in the First World War; eleven of them are profiled here, and the accounts show the difficulties and dangers they encountered as they served alongside the troops. It’s a fitting tribute.