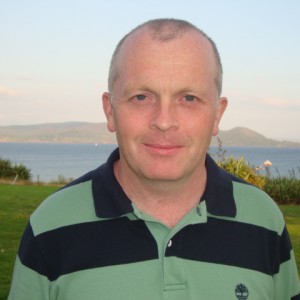 Colm has always dabbled in poetry, but it’s only in the past six years or so that he’s begun to take it seriously.

“Before that, life got in the way,” he says. He was working as a chemical engineer in the food industry, and in pharmaceuticals, running plants, but two years ago he accepted redundancy, and is now an at home Dad.

“I got involved in the open mike scene in Cork, and I’ve had poems published in magazines. I tend to vary my themes and style.”

Colm also writes prose, and makes poetry films. One was shortlisted for the Indie Cork film festival in 2014.

“It was shown in Kiev at a film festival too.”

In 2014 Colm won the Cúirt new writing poetry prize, and was selected for the Poetry Ireland Introductory series.

Who is Colm Scully

The Day Job: A stay home dad, and writer.

Interests: “I like walking, history, science and philosophy. I play indoor soccer too.”

Second Book: “I’m thinking about the second collection of poetry.”

Top Writing Tip: Prioritise. Writing has to be prioritised. It’s the first thing I do in the morning, once I’ve walked the dog and got the children to school. I’ll write every day, even though it might only be for two hours.”

These poems lead us on an odyssey from the early Christian World of Skellig Michael to a post-apocalyptic planet.  They reflect Colm’s interest in history, philosophy and science.

“These are very personal poems. I like to be objective, but inject a bit of satire too. There’s no theme as such. But all the poems are about people searching for their place in the world; different characters are trying to find where they stand in society or in their own lives.”

The Verdict: Thoughtful, and humorous, these poems display an original slant on life.