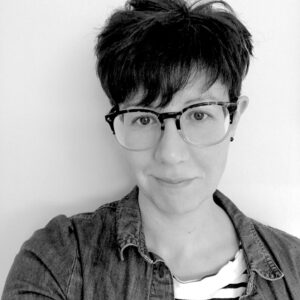 Claire’s family were great users of the library.

“I always wanted to be a writer, but in the way people who love to read want to – as an abstract fantasy. I wasn’t chasing it.”

An academic, Claire taught in a school in the year between taking an MA and a PhD.

“Since then, I’ve been teaching at Brunel University in London. I’m now Professor of English and Irish Literature.”

Claire turned from academic writing when she was dealing with the difficulties and complications of new motherhood.

“I began writing when the twins were in NICU to keep a track of what was happening. It was a story I had to tell.

“I wanted to write a book that took motherhood seriously but wasn’t pious,” she says. “And to capture the big emotions, and that mad alternative universe you’re living in with very small children.

“I entered an extract in a life writing competition in 2017 as an experiment, to see if I could do non-academic writing. The book grew from that”.

Who is Claire Lynch?

The Day Job:  A writer and an academic.

In Another Life: “I love talk radio. I’d like to be a presenter grilling politicians who aren’t giving a straight answer.”

Second Novel: “I’m testing the waters with a novel. It deals with the anticipation of grief”.

Top Tip: “Write where and when you can, because that log cabin isn’t coming!”

Claire suspected that having children with her wife, Beth, wouldn’t be easy, but she didn’t anticipate the dramatic way in which her life would be transformed.

This wondrous book chronicles it all; the thoughtless comments from professionals, the traumatic weeks when her twins’ lives hung in the balance, and the joy of watching a new person develop.

The Verdict: A real gem! I’ve never read such an intelligent, emotive and thought-provoking account of motherhood.

Published in the Irish Examiner on 15th January 2022.