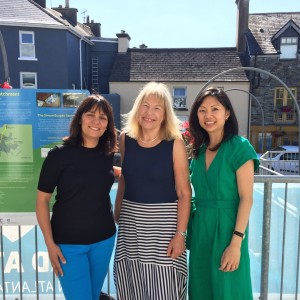 Books were scarce in Trinidad, when Claire was growing up there, but she was lucky.

“My mum, who is Irish, opened a book shop in our basement.”

Claire always kept notebooks, but when it came to university, she wasn’t sure whether to study literature or science.

“I had long conversations with my aunt and chose physics because I thought it would lead somewhere.”

After graduating, Claire moved to Italy and taught English for a year.

“I had lots of free time, and that’s when I really started writing. I wrote in notebooks, trying to write stories.”

Then it was off to Cork, where she worked in her mother’s family business.

After that, came London, where she took a Masters.

“Then I worked in a science charity doing office stuff. And I tried several novels getting to 30,000 words before I ditched them. It wasn’t until I had my children that my writing got serious.”

Who is Claire Adam?

The Day Job: “I work part time in a school. It’s an office job.”

In Another Life: “I’d be a neuroscientist. It’s where all the answers are.”

Second Novel: “I have a two-book contract. I’m writing it. It’s very different.”

Top Tip: “Read all the best stuff you can find, but give yourself permission to not read sometimes. When I’m writing I have to create quiet to listen to my characters. Reading can drown out their voices.”

It’s Trinidad in the late eighties, and a boy- one of a set of twins – goes missing. In the following hours and days, as his father searches for him, he’ll learn some unpalatable truths. With family loyalties strained, how can he do the right thing?

The Verdict: Atmospheric and compelling. It’s almost impossible to believe that this searing tale of family jealousies and ambition is a debut.

Published in The Irish Examiner on 27th July.