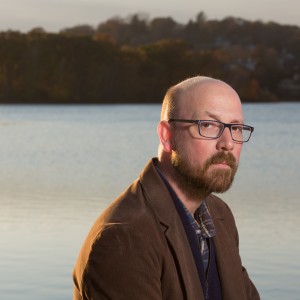 Chip wrote a novel aged 8, which included the great depression and contained volcanoes. After taking a degree in journalism, he turned to fiction.

“During Grad school I focused on short stories – some were published – and afterwards I tried, seriously, to write a novel. I made several attempts and failed.”

His third book, based on events in his family’s dark history, didn’t gel either.

“After I got married, I took two characters from that novel and sent them on a honeymoon – not realising this was a new novel. I kept going and wrote the first draft of Cape May in two months.”

For years, Chip was teaching fiction, at GrubStreet in Boston. Then life intervened.

“We had a baby a month before the book sold, and we moved from Boston to Los Angeles to be near my wife’s family. We’re now getting our bearings and looking for a place to live.”

Who is Chip Cheek?

The Day Job: Father and writer.

In Another Life: “I’d have been an astronomer; I’m obsessed with astronomy and thought of majoring in it.”

Favourite Writers: “My heroes, and those who have most influenced me are Alice Munro, Marilynne Robinson, and Flannery O’Connor.”

Second Novel: “I’m eager to get back to writing one when the upheaval settles down.”

Top Tip: “I don’t believe in inspiration. Writing is showing up to work every day. Ideas come from the work itself.”

Effie loved her childhood summers in Cape may, but when she arrives there with Henry, for an off-season honeymoon, its lifeless. After a few days, where they’re, tentatively exploring each other, they decide to cut the trip short. Then some socialite neighbours appear, they’re drawn into the high life, and their relationship is tested, as life takes unexpected turns.

The Verdict: There are echoes of Scott F Fitzgerald in this sensitively written, atmospheric portrayal of love, desire and betrayal. I loved it.