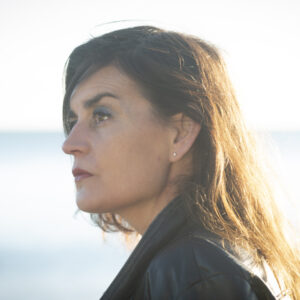 Catherine is a lifelong prolific reader.

“As a child, I loved libraries, and I was always interested in the lives of writers.”

After school Catherine started a marketing course, but disliking it, began working in the arts and culture industry.

“I got married in my 30’s, and that’s when I started writing,” she says. “I taught myself, writing in notebooks, and then I started getting published and short and longlisted for stuff.”

That’s when she decided to go for an MA in Creative Writing.

“That was brilliant,” she says. “I learned so much.”

She’s had short fiction published in Banshee, and in an anthology, Still Words Turning.

The idea for the debut came to her five years ago, when having walked her children to school, she heard on the news that a parent had killed their child.

“That stayed with me. I thought how could you hurt someone you love? It’s unfathomable. I wanted to explore whether jealousy could be a motivating factor.”

Who is Catherine Talbot?

In Another Life: “I’d love to try acting. I’ve been doing narrative structure classes with the Lir Academy. It’s a whole other world of creative thinking.”

Second Novel: “I’m on my third draft. It’s about two male workmates. I find it easier to go into a man’s psyche.”

Top Tip: “Read everything. And hold your nerve with your work.”

Des adores his wife, Jenny. Loving, if envying her artistic talent, he wants, above all, to be a loving husband, and a good father to their two children. In many ways exemplary, his jealousy, and fear of the future fires his controlling streak. And there are dire consequences.

Published in the Irish Examiner on 13th March