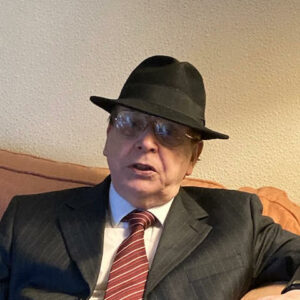 Brian wrote his first book, aged five, called Professor Souto goes to the moon. Since then, he has been trying to write a novel.

“I had all sorts of plots. I’d write a few chapters but never get beyond that. I had the impetus, but not the skill.”

Brian left school aged 13, having got into a fistfight with a teaching brother.

“I was a rough brat, looking at gaol,” he says.

He became an office boy, then made the jump into PR.

“I started as a Junior trainee, then a PR Executive, then PR Group manager, and finally I headed up the company. After that I set up my own PR company and did that until I retired.”

“I edited trade magazines and wrote an occasional short story. They were published in various magazines.”

A few years ago, in hospital for a check-up, Brian had an emergency quadruple bypass. It was touch and go.

“When I woke up, I was in a state of confusion, not knowing who I was or what had happened. That intensity of feeling gave me the start of my novel.”

Throughout his life, Brian has had two consistent dreams: one about coffins and corpses, the other about a land of pure ecstasy.

“I began to wonder if another dimension existed somewhere, and I brought those elements together.”

In Another Life: “I’d love to be a Professor of After Life Studies.”

Second Novel: “I’m working on one.”

Top Tip: Have your draft novel critiqued by a professional editor.

When a young Dublin advertising guru, Kieran Sheridan Le Fanu survives a gruesome car crash, he comes to believe that he is dead. Later, struggling to differentiate between memory, fantasy and reality, he is stalked, attacked by strangers, but beguiled by the enigmatic Aoife, as the action flits between present and historical Dublin.

The Verdict: A thought provoking novel about death and a possible afterlife with gothic overtones.

Published in the Irish Examiner on 22nd May