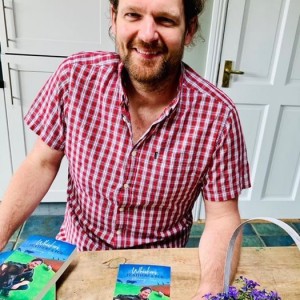 Brought up on a farm, Austin has always wanted to be a vet.

“My dad was a big storyteller. I loved hanging out with him in farmer’s markets and in the pub after mass.”

“I started out in Western Australia, and then I became a locum, travelling around. I went to the big cities and spent two years in Tasmania. I also travelled to New Zealand. I treated orphan kangaroos, wombats and wallabies when their parents have been hit by a car.”

Inspired by James Herriot, Austin started writing three years ago when he was travelling in New Zealand. He shared one with friends, and they asked for more, so he built up a collection.

“I sent one to Ireland’s Own Magazine, and they asked for a series.”

Austin arrived back in Ireland three months ago.

Who is Austin Donnelly?

Date of birth: 1983, in County Armagh, on the shores of Lough Neagh.

Family: A twin sister living near him, and other family in Northern Ireland.

In Another Life: “I’d love to be a scriptwriter, work with a team, and come up with scripts. I always have ideas in my mind, and it would be fun to make a living from them.”

Top Tip: “Get the first draft down without judgment.”

These humourous animal stories are taken both from Austin’s childhood, and from his experience as a vet. There’s one about a 35-year-old cow who surprised a whole village when she delivered a calf.

“That was fun to write,” says Austin. “There was a who done it element.”

The Verdict:  Entertaining and informative, this is a tender feelgood read.

Published in The Irish Examiner on 25th April 2020.