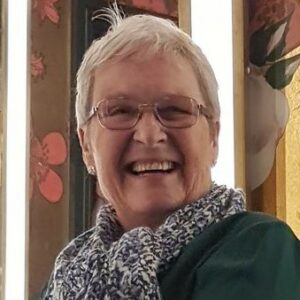 Leaving school with excellent typing skills, Ann worked for London University before falling madly in love with Peter Ingle at 20. In Ireland, Ann typed up manuscripts and essays for everyone from students to Lord Killanin.

“It was hard graft, getting it done as quickly as possible,” she says.

Known for writing good letters, Ann wrote a blog for a few years after she’d retired as Editor of a community newspaper. And in 2018 she ghost-wrote Driven, for Rosemary Smith.

“That’s how it started,” she says.

Her daughter, Róisín, mentioned, in a column, that her mum was writing a memoir.

“It was just for the grandchildren,” says Ann. “But Patricia Deevy from Penguin got in touch, and I signed a deal around Christmas.

“I wrote the book from January to April, in the third lockdown. Life was at a standstill anyway. I wrote every day from nine until one – then longer, when my deadline came closer. The background of myself and Peter was already done.”

Ann writes a story each week with the PS Writer’s group.

Who is Ann Ingle?

Education:  From aged 10, Clarke’s College in Walthamstow. Left at 16; At 51, Trinity College Dublin, English and History.

In Another Life: “I would have loved to have been an actress. Every time I see Judi Dench I think, that could have been me!”

Second Novel: “I might write essays, but I don’t envisage a book.”

Top Tip: Keep a notebook beside you and when a thought comes, write it down. And try and have faith in yourself.”

A searingly honest account of Ann’s marriage and life as a single mum of 8. It talks of sex, money difficulties, mental health troubles, grief and survival, but mostly, it talks of love.

The Verdict: I adored this memoir for its charm, humour and positivity.

Published in the Irish Examiner on 2nd October