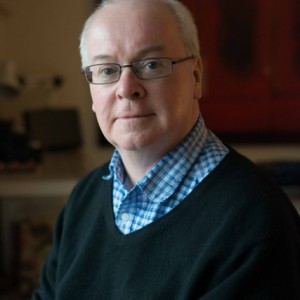 For years, Andrew wanted to work in the theatre. But he never really made it.

“I was banging my head on the door, doing a lot of poorly paid and unpaid work. So at thirty, I went to Asia and taught English.”

He’d found his vocation! On his return to England he trained, then taught English and drama up to A’Level. Meanwhile, he penned a novel for children during the holidays. But he felt no great imperative to finish it. Then fate intervened.

“My pupils were refusing to work one day, so I read them a story I had written. At the end of the lesson, 12-year-old Joe stopped at my desk, and said, ‘I really enjoyed that story. You should send it to Mum.’ She was a literary agent. I sent her three chapters, and she loved it and published my first children’s book.”

After seven years Andrew taught in Manilla, and it was there that he wrote his bestselling book for children, Trash, published in 32 languanges.

“That enabled me to stop teaching.”

He’s also written radio drama, and collaborated on film scripts. The idea for his adult fiction debut came when he was working on a radio play about a man on a train.

Who is Andrew Mulligan?

In Another Life: “A chef, in a really nice restaurant, where there’s no pressure.”

Top Tip: “Start writing. Show your work to someone who will be honestly critical, and will challenge you.”

Michael has been living a lie. About to marry a woman he doesn’t love, he’s lost his job and has no money, but can’t admit it. So he decides to end his life. Can a train journey change his mind?

“I love the rhythm of trains. I thought of a man with something to hide who has long circular conversations. Something has happened to lock him up. He’s unable to function, but pretends that he can.”