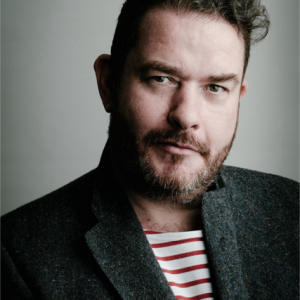 In his twenties, Andrew worked as a TV researcher in Scotland, then, returning to Ireland, he worked in script development for a company led by Ed Guiney and David Collins. Then he became head of development at the Irish film board, recommending projects for funding. He stayed there for six years.

“I had been writing screenplays, but I couldn’t submit them to the board, so I started writing prose.”

Andrew’s first short story, published in The Stinging Fly, won an Award at Cúirt, and further stories appeared in various literary magazines, and in Town and Country, edited by Kevin Barry.

Who is Andrew Meehan

Date of birth: 13th October,1971, in Dublin to Scottish parents. Moved to Scotland as a teenager.

Home:  Between Dublin and Galway – visiting Glasgow where his partner is working.

Family: Mother, Elizabeth Meehan, Partner, Orna Prendergast, a stem-cell researcher. “Orna has made me think differently about writing. Science is about discovery. It’s a liberating feeling thinking something is there and you have to find it, as opposed to being this deity that has to create it.”

The Day Job: Teaching screen writing at NUI Galway, and teaching in Edinburgh.

In Another Life: “All I want to do is write a second book.”

Second Novel: “It’s a love story set in Germany during the week in 2014, when Germany won the world cup.”

Top Tip: Print your manuscript, and put it in a drawer with a freshly dug potato. Don’t read it until the potato has gone to seed.

Eva finds herself in a Paris restaurant, with no memory of her past. Then she sees a man she thinks she knows, and pursues him, looking for answers. Suspecting that the recall of a trauma is waiting for her, she wants to filter her memories. What is she remembering, and what is she discovering anew? Who can she trust?

The Verdict: I loved it. Mesmerising, inventive, heart-wrenching, and brilliantly realised. The most interesting debut of 2017.

Published in The Irish Examiner on 14th October 2017.