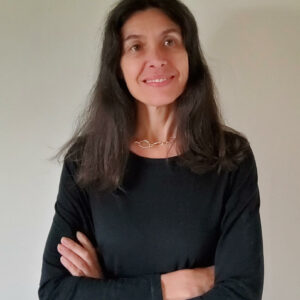 Brought up bilingual in County Meath – Anamaría has a Spanish mother and Irish father – she moved to Dublin for college and has lived there since.

Straight after getting her MA, Anamaría worked in the translation industry, in localisation

“I was Translating Computer software and manuals from English to Spanish. It left no room to read or write, so after two years I worked as a freelance translator, first in localisation, then more on literature, especially poetry.”

Meanwhile, she was writing stories and poetry with some success.

“I published my first poetry collection in 2008,” she says. “Focusing on the domestic and children, it felt very close to me.” She has published many collections since, the last one in 2018 – the year she left a long-held teaching post in DCU. Since then, she has continued teaching and writing.

Anamaría has long wanted to write about her grandfather, because she felt conflicted by his taking Franco’s side in the Spanish Civil War.

It was only when she researched the war, that she realised the complications that split families.

Who is Anamaría Crowe Serrano?

Place of birth: Born at home in Dublin.

The Day Job: Teacher and writer.

In Another Life: “I would be a composer. I studied composition at the Royal Irish Academy of Music and was runner up in the composer section of Young Musician. I chose language and literature because I wasn’t a confident performer.”

Second Novel: “I have an idea for a novel.”

Top Tip: Follow your dream, but work very, very hard. If you persevere, eventually you’ll get a lucky break.

Sisters Mariá and Julita shelter together at the height of the Spanish Civil War along with others who sought refuge. In conflict, supporting different sides, one of them has a dangerous secret.

The Verdict: A poetic, stylish debut showing the brutality of war.

Published in the Irish Examiner on 10th July.