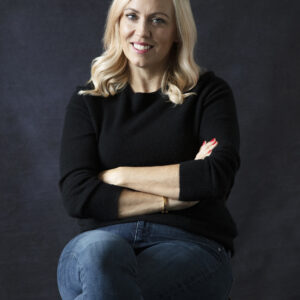 One of 5 children, Amanda has always written.

After college she worked for JP Morgan in Dublin, and then Australia.

“I was successful but not fulfilled,” she says. “I felt I should have studied communications.”

“It was wonderful,” she says. “I watched my first voice over with my family. My dad was so proud, but he died, suddenly, a week later. That was a massive shock.”

A year later, when Sky withdrew from Ireland, Amanda worked Fulltime for Newstalk.

“I’d already been working shifts there. I stayed for ten years, reporting, reading the news, and making documentaries.”

By then, Amanda was married with small children, and the hours became untenable. So she became Deputy Editor with www.HerFamily.ie, writing parenting articles. A year later, moving closer to home, she became editor of Mummy Pages.

“Then I went freelance, writing, mainly, for Image Magazine.”

Encouraged to write fiction by her friend, Andrea Mara, and mentor, Glen Meade, she began her novel on January 1st, 2021.

“We’d moved to Spain for a while. I was sitting at a beach-bar thinking, what if I had some wine, and lost one of the kids? I started writing immediately and wrote 1,000 words a day.”

Who is Amanda Cassidy?

Education: Loretto, Foxrock, and The Institute of Education; Trinity College, Dublin, European Studies, including Sienna for a year.

In Another Life: “When I joined Sky, I turned down a job with the European Institutions.”

On holiday in Florida Keyes, Dr Mirren Fitzpatrick sits drinking at a beach-bar when her younger daughter goes missing. A media witch-hunt ensues. Is Mirren a heartbroken mother, or was she the cause of her daughter’s fate?

The Verdict: A clever, twisty family tale that keeps you guessing throughout.

Published in the Irish Examiner on 8th October.