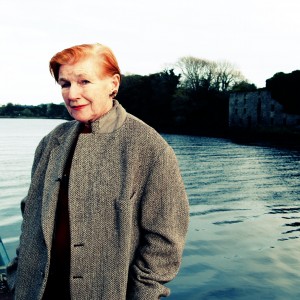 Brought up in New York to Irish parents, Alice was an only child with an abusive father. Lonely, she started writing diaries when she was 10.

After university Alice became an actress, mostly in fringe theatre, whilst working as a waitress.

She wrote a play before starting her memoir, and she now writes essays for the Huffington Post.

In her sixties, Alice has become a photographic model. She has featured in two books on older style, and an advert for Lincoln Cars.

“My mother worked in a grand house, and I was always exposed to extreme glamour.”

Who is Alice Carey

Date of birth: Born in New York City. “I don’t divulge my date of birth.”

The Day Job: A writer.

Interests:  “Geoffrey and I love architecture, and particularly churches. We walk wherever we are.”

Favourite Writers: James Joyce. “As I get older I ‘get’ his work better. Each time I find something different.” Ian McEwan; Truman Capote; Edna O’Brien; Colm Toibin.

Second Novel:  “I will write another book. Perhaps a book of essays under categories. I’m inspired by Michael Harding.”

Top Tip: To write you must write. You have to be incredibly disciplined. I have my writing day and I do not deviate.”

Alice’s sometimes violent new York childhood was transformed when her mother started working as a maid for the Broadway producer, Jean Dalrymple. Then, in the sixties, she and her mother travelled to Ireland by ocean liner, but Alice found the attitudes of the time a dark contrast to all she had known.

Ten years ago, on holiday in Ireland, Alice and her husband bought an abandoned Georgian Farmhouse in West Cork, and began its restoration. The memoir moves between West Cork, New York, Fire Island and Killarney, as Alice’s childhood memories start to surface.

“I write because it’s my legacy.”

The Verdict: A nostalgic, sometimes poignant memoir which shows the effect of Alice’s childhood on the woman she has become.

Alice will appear at the West Cork Literary Festival on 21st July.

Published in  the Irish Examiner on 9th July.