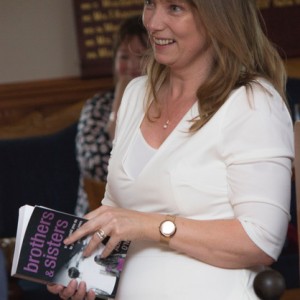 From a family of avid readers, Adele used to choose library book for her parents and grandparents.

“Reading the blurbs in order to choose the right books was really useful when it came to writing my book synopsis,” she says.

After a stint, working for the Leicester City Football club, in charge, mostly, of the young Irish players, Adele worked for the City of Dublin Youth Service Board as a child protection officer.

“I left when I was married and pregnant, and decided to move home to Arklow for my maternity leave. I’m still there.”

In 2007, Adele opened a Montessori school, running it until 2012. She got the urge to write, but then her father became ill and died, followed by her mother. When, finally, she wrote a novel, she got it critiqued by agent Sheila Crowley, who said it was good, but not compelling.

“I then wrote a different book, and included a murder. After some rejections, Agent Tracey Brennan took in on and got me a deal.”

Adele is on the committee of the Wexford Literary Festival.

Who is Adele O’Neill

In Another Life: “I’d like to be an advocate for Human Rights – or a judge.”

Second Novel: Due out in Spring next year, it’s about two women who face impossible life choices. There’s a secret at the heart.

When human remains are discovered on the Fitzpatrick Estate, foul play is suspected. Detective Kelly contacts Tim Fitzpatrick, who, living in Dublin, is now in his sixties. Visiting the farm, he is clearly uncomfortable. Why did he and his sister leave their home so suddenly, and why has he never returned?

When the body is identified as that of his uncle, who went missing in 1970, Tim tries, desperately, to protect his sister from past pain.

The Verdict: A tale about buried secrets, abuse and lies.

Published on September 2nd in The Irish Examiner.