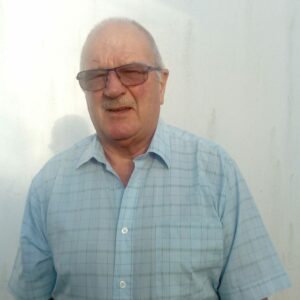 A trained surveyor, Ray ran a successful subcontracting business. Wanting to retire at 50, he volunteered to go to Bosnia.

Back in Ireland, involved in motorcycle sport, Ray trained in first aid with the Red Cross – but got interested watching the paramedics.

“I got cerebral malaria in Mozambique and was not allowed back for six months. I took a six-month course as an emergency medical technician, and that led on to a paramedic training.”

From there he got a job on ambulances, able to work between his trips in Aid work.

“I need a month off when I return from trouble spots to adjust; then I’m ready to work.”

He retired from the Ambulance service at 65.

“I started to write after Bosnia, because my head was all over the place. The shops were full for Christmas, and in Bosnia they had nothing. I couldn’t explain what was wrong, and my wife said, ‘write it down.’”

He kept notes throughout his career and wrote some articles for the Irish Times and the Huffington Post.

Who is Ray Taylor?

Second Novel: Diary of a Paramedic. “I’m writing that at the moment – I’ve nearly finished.”

Top Tip: Write what you know about. Try and grab the reader from the first page. Persevere.

At 50, Ray became a humanitarian aid worker, working in Bosnia, South Sudan, Sierra Leone and Mozambique. He recounts the stresses both of the work, and of readjusting to ordinary life afterwards.

Published in the Irish Examiner on 16th October, 2021