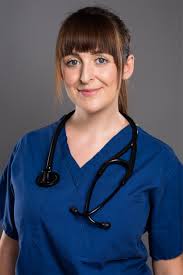 Aoife Abbey has always wanted to be a doctor – it was a decision she took as a small child growing up in Dublin, but until she entered medical school in Warwick, and went on to be a junior doctor in England, she had never thought what the job entailed.

“You say these things when you’re a child; that you’re going to be a doctor, a fireman or a nurse, but you don’t think what that will be like. I didn’t, but I knew it was what I was going to be.”

Now that she’s on the career ladder – and, as a registrar in Intensive Care, will soon be able to apply for a consultancy role, people are constantly asking her questions. And in particular they want to know how it feels to be a doctor.

“They’ve been asking me for the past seven or eight years, but I could not explain it in a sentence, and I guess part of me wanted to do it justice – to explain it all.”

She first started to write about her job when she was newly qualified – and sent an article to the British Medical Council. It was published, she sent another, and after publishing three or four over four years, the editor, Neil Hallows asked her if she would be interested in taking over a blog called The Secret Doctor. This was aimed at fellow professionals, but the book, which came from the blog is for a much wider audience.

“Over time the blog got shared on twitter, and expanded into the public domain. I decided it should be accessible and understandable to anybody who has ever said, ‘What is your job like? What do you do?’ I wanted everybody to get something out of it, and certainly anybody interested in Intensive Care.”

And now she has. Her book, seven signs of life, tells stories of Aoife’s day to day encounters with patients – of the stresses, and all the ups and downs of life as a junior doctor in intensive care. She divides the book into chapters headed, Fear, Grief, Joy, Distraction, Anger, Disgust and Hope, and in each, she describes how each emotion affects both the patients and the medics. Not that the emotions can be so easily divided.

“We all slide from one of these feelings to another in a moment,” she says.

It makes for enlightening, if sometimes traumatic reading. We learn of good, and bad deaths – of the tension of making these life and death decisions, and of the difficulties in performing well when you’re beyond exhausted. But Aoife’s passion, empathy, and deep understanding for all that she does comes shining through. But why did she choose such an intense  specialisation?

“In intensive care you have a really broad scope of knowledge,” she says. “You have a hand in lots of different organs and pathologies and diseases.”

She loved the necessity to consider all the ethical questions.

“And, working with a whole disciplinary team, you get close to a very rich group of nurses, physiotherapists, and dieticians – and with a whole load of specialities.  That really appeals to me.”

It’s clear that Aoife has real empathy, yet once she’d left medical school there was no training for that.

“What you get depends on your seniors, and whether you are brave enough to bring it up. As a junior doctor I was able to massage someone’s feet to get them through an MRI, and hold someone’s hand whilst they died. You aim to be the kind of doctor you would like to have looking after your relatives, but nobody teaches you how to do that; you have to work out what that is yourself.”

Most of us are a little afraid of death, and would hope for a ‘good’ one. But that’s not always possible.

“There are a whole cohort of people who are able to have a say in how they die, but that’s not the reality for the majority of people. People come in unconscious and never wake up – they don’t get to control their death.”

And if it’s difficult dealing with the dying, it’s can be complicated working with their relatives.

“I work with families who are going through hell. They are in that horrible condition, and you have to feel comfortable saying certain things. You have to think of yourself as facilitating someone else’s journey rather than necessarily being seen as intrinsically good, or be seen as fixing the situation. It’s about becoming more comfortable with yourself more than anything.”

Aoife was once called a murderer, when she explained to a relative, that she would be removing a tracheal tube from a patient with irreversible brain damage.

“They would not survive and that had been explained to the relatives,” she says. “But as a doctor, you don’t get to behave as though you’ve been accused of an unspeakable act. This isn’t about you. You are there to be what your patient needs you to be and what the people whom that patient love need you to be.”

There are many heartrending stories where Aoife has to accept that she can’t save someone,  and when they’re young, that can be particularly hard to take, but she was equally moved by the situation of an elderly man, who had lived independently, but after a fall, had to face that everything in his life had changed utterly.

“Hospital is often lamented as no place for the old; it is often not a friend to those who fight to remain fit.” And whilst, hearing his age, some of Aoife’s colleagues felt inclined to write him off, she understood his dilemma. “We see it an awful lot. The concept of a fall as a significant event in someone’s life is hugely underestimated. They often cope well until something very small happens. Losing their independence is frightening for them, and often family support just isn’t there.”

We hear of Aoife’s uncertainties, especially at the start of her career, when she was unclear whether she should ask for help in certain situations. Fortunately, most of her colleagues, lending support, praised her for the decisions she made.

Perhaps inevitably, though, there are times she makes a mistake. She recounts one occasion, when, looking for signs of pneumonia on a chest X-ray, she failed to notice a perforation of the bowel. Was that hard to admit in print?

“It was important to put that in,” she says, “but I had to veer against the temptation to put a lot of justification in my account – that was difficult.”

What’s the most challenging aspect of her job?

“So much of what we do in intensive care is uncertain. It’s hard knowing, when you make a decision for patients, that it may be something that leads to their death.  Patients are so vulnerable in Intensive Care. And you need to remain attuned to your own weaknesses, but also learn that the patient is depending on you.”

There have recently been several books published by medics, documenting their experiences, but most were written by those who had already left the medical profession.

“Or, they write them when they are very eminent and respected. I was writing this contemporaneously, so I can capture the uncertainty and how it was at the time. I’m showing my vulnerability for a reason. I already know that my career will not ultimately be defined by heroic procedures or clever diagnoses. My seniority will be defined by my ability to think ethically, to communicate well, and to put my patient at the centre of every decision I make.”

Published in The Irish Examiner on 23rd March, 2019