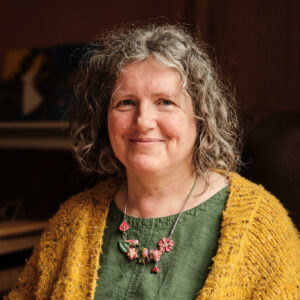 When the writer Anne Booth was a child, she wanted to become a priest. As the youngest child of Irish parents, who, having emigrated to England, were strictly practising Catholics, she never rebelled.

“I felt pressure not to upset my parents,” she tells me, over zoom, “and, luckily, I had a positive experience of Catholicism. There was a lovely Welsh priest who was good, kind, and really lovely. He was great at answering my questions about why God let people suffer and whether dogs would go to heaven. And the church was a place of beauty to me.”

Her faith was cemented when, at 16, she visited a nun, Sister Margaret, at a convent in Edinburgh.

“The nuns were such fun,” she says, “and were more relaxed than my family were. They were much less pious, and watched Dallas and Dynasty, programmes my parents would never let me watch.”

Anne went on to marry and have four children, but she never forgot those nuns. And they came to her mind in 2012, when she was taking an MA in creative writing. Since her teens, she had visited the convent again, and had heard of nuns in York who, short of money, had transformed their convent into a restaurant and Bed and Breakfast.

“There was a documentary about them, and a short clip of an elderly nun queuing at a newsagent for a lottery ticket.”

Taking these ideas, and adding a case of a levitating nun, and a pilgrimage to Rome, Anne started her novel.

“I wrote a large part of it, but set a lot of it in Edwardian times, in flashbacks. I did a lot of research, and I was pleased with it, but got rather bogged down. And later, when I did a course in literary fiction, I went down the wrong path. Anxious not to offend anyone, especially my parents, I wrote a pious book, and I lost heart.”

Meanwhile, Anne had done a series of jobs to keep the wolf from the door. In her time, she’s been a bookseller; she’s taught English in Italy; has lectured in university and been an Arts and Crafts coordinator in a residential home.

“I’ve done tour guiding and tutoring. And I’ve washed up in cafes. That was a lifesaver when I ran out of money.”

Life went on pause when Anne became a carer for her parents. She managed to move them to a house opposite her own, but found the strain of caring for her mum, with dementia, and her dad, with cancer overwhelming.

And when life got too hard, she went off on various retreats. She visited Anam Cara on the Beara Peninsular and attended various Arvon writing courses. One was for children’s literature – a subject she had earlier studied for an MA.

“It was joyful! I was so anxious about my novel, and this was such fun! We had exercises, like, ‘You’ve met a dragon. What do you say?’ I started writing a children’s book.”

Perhaps ironically, her first, Girl with the White Dog, was anything but joyful. It was set in Nazi Germany. It went on to be shortlisted for the Waterstone’s Book prize but took a while to find a publisher.

“In the course of submitting it, I kept getting rejected,” says Anne. “So, I wrote a picture book about a fairy who kept getting things wrong, to cheer myself up, and that was the first to get accepted.”

Since 2014, thanks partly to her ‘wonderful’ children’s book agent, Anne Clark, Anne has written 23 books for children.

Our conversation has been delayed by several weeks, because Anne had a protracted dose of Covid 19. We talk about the whole Covid experience, and she says she’s just relieved that her parents didn’t live to experience it.

“Dad would not have followed the rules,” she says, explaining that towards the end, he was out of control. “One day a neighbour saw him up a ladder sawing trees. He promised me he wouldn’t do it again, but was seen by another neighbour up a ladder, later that same day. When I said, ‘but you promised you wouldn’t,’ he said, ‘It was a different ladder!’”

After her parent’s death, Anne got back to her original novel. After attending an Arvon course for commercial fiction, moderated by writers Judy Astley and Katie Fforde, she began rewrites in earnest. And thanks to the huge support and encouragement of those writers, and of fellow writer AJ Pearce, and mentor, Julie Cohen, she completed the manuscript.

“Julie hated the Edwardian bit. She told me to cut 40,000 words and kept encouraging me to be myself.”

Once it was ready for submission, Anne acquired agent Jo Unwin, and Small Miracles was published in August, ten years after that first idea. A charming, humourous and deeply affecting book, this adult debut has been well worth the wait.

After the early death of Sr Helen, only three nuns remain in the order of the Sisters of Philomena.  There’s the reluctant Superior, Margaret, who is grieving for her lost friend; there’s ninety- year-old Cecelia, and there’s Bridget – a warm hearted Irishwoman and fan of Daniel O’Donnell, who cooks for the parish priest. With little money, the nuns might have to sell up; until Cecelia plays the lottery and it sparks a series of small miracles.

Although it’s steeped in religion, there is nothing pious about this most enchanting tale. There’s a love story between two men; and a strong strand of realism in the strained relationships that evolve between the three women.

“I was interested in the human story,” says Anne. “And of women living together and learning to love and forgive each other, and that’s not confined to the Catholic Church. I drew a lot on my experience of sharing houses in my twenties.”

Whilst she’s critical of the establishment of the church, and keenly aware that it needs radical reform, Anne wanted to bear witness to the everyday kindness and goodness that is there.

“I’ve always had questions about the church,” she says. “I’ve stayed because of my experience in prayer and spirituality, and not because of the rules and misogyny,”

There’s a poignant scene in Rome, where Mother Margaret’s crisis of faith overwhelms her. And a young friend, Katy, sympathising with Margaret over the loss of her friend, reminds her of her description, years earlier, of what being a religious sister was like.

‘And that you were following an unheard melody and were straining to hear it, but your longing to hear it, and your belief that it was infinitely sweet, made you carry on.’

Nodding, Anne says that that’s how she feels about her faith.

“It’s a continual searching,” she says.

Anne is currently writing her second adult novel – a sequel to Small Miracles. It’s called Small Mercies and is set partly in Ireland – following Bridget who discovers that her family are not all she’d believed them to be.

“I’m trying to finish it now,” she says.

If the church were to reform, and decide to allow the ordination of women, would Anne be tempted to turn to that early ambition and become a priest?

“In theory I would, but I don’t know if I’d be very good,” she says. “I’d like to talk about prayer, but I don’t think I’d be good at the organisation. And I don’t like conflict, so would not be good if people got cross and upset with me. I would want to be a nice priest but would not want to be clericalised.

Published in the Irish Examiner on 22nd October.