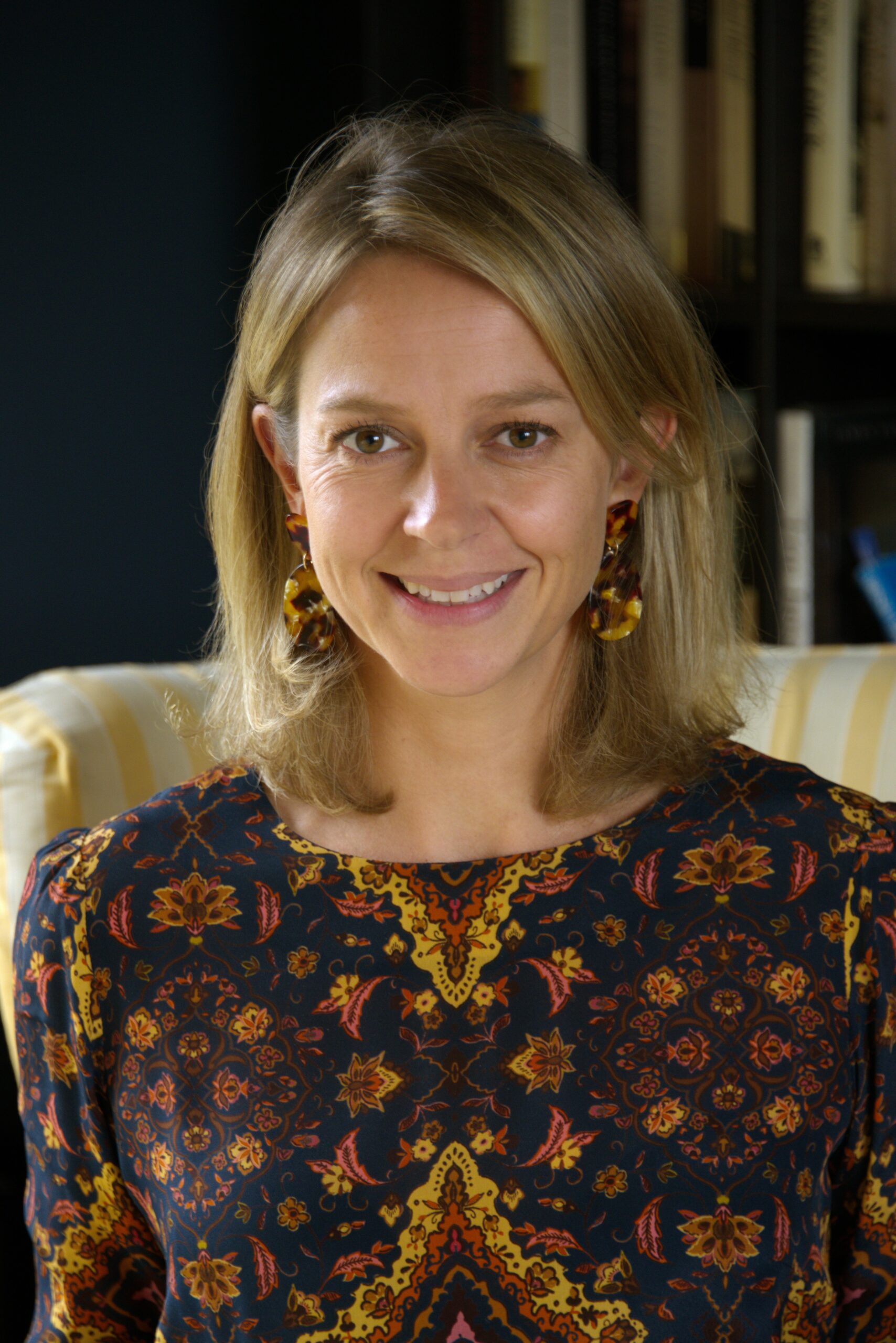 Ally Bunbury’s earliest memory is of driving round the drawing room on a little cart, smoking a candy cigarette.

“I was pretending to be Alexis Carrington,” she says, talking of Joan Collins’s character in the TV series Dynasty.

Many years later, working in PR in London, Ally found herself at a glitzy lunch in the Savoy, standing between Joan Collins and Simon Callow.

“It was at the drinks before lunch,” Ally remembers. “Joan was so glamorous and gorgeous, and such a lady. We actually discussed the weather – and that it was surprisingly chilly. She said, ‘Isn’t it, darling!’

Ally has never forgotten that encounter, or, indeed, her childhood fascination with that 1980’s TV show. And when, during lockdown, a new version of Dynasty was shown on Netflix, Ally binge watched the series, avidly.

“I watched it because it’s feelgood,” she says, “It gives me the feeling of Hollywood glamour, and there’s a twist every few minutes. It’s wonderful!”

It also reminded her of all the formidable older women who had shaped her life – many of whom had recently died.

“During Covid some really key people died, although not because of Covid,” she says “They were in their eighties and were like great aunts or grandmothers to me but were also amazing friends.

“They were friends of my mum’s, although they were more than a decade older than her, and they’d been beautiful in their day, and still had that amazing confidence. They were straight talking – rude sometimes and could be terrifying to be around as a child and a teen. But as I’ve grown in confidence, I’ve started to soak up their advice, and ask them about their love lives and any challenges they came across.”

Grieving for them, wanting somehow to pay them homage, she invented a character, Lady Serena, who was an amalgam of them all. And she’s central to Ally’s third and latest novel, All Wrapped Up, which is set in a large, dilapidated country mansion.

In the novel, Holly leaves London six weeks before Christmas to work for Lady Serena, having called off her engagement. She’s to declutter the house – Knockboden – a job she loves, but no wages are forthcoming. And when they hear from a reality TV company, who want to film a Christmas Special at the house, it seems all Serena’s money problems are over.

“I loved that idea of Hollywood coming to an Irish house,” she says. “It’s like when Posh and Becks had their nuptials at Luttrellstown Castle.”

To research the idea, Ally watched every single episode of the 2021 season of Love Island.

“I watched with my teenage daughters,” she says. And we watched Married at First Sight and Love is blind. All that fed into Insta Love.”

Ally’s main aim was to produce a book that would spread joy – and that’s why she settled on a Christmas theme. And if it felt odd to be listening to Mariah Carey sing All I Want for Christmas Is You, every day during the summer – that, and the Christmas tree on her desk helped to keep her focused.

And during the midsummer heatwave, something happened that made her feel she was on exactly the right track.

“I was driving to Rathvilly at 8.0’clock in the morning and it was already boiling. I was listening to Marty in the Morning and he was chatting to the AA Roadwatch lady about their favourite Christmas songs. I thought, this is bizarre! And the next thing, he played the Mornington Singers version of Have Yourself a Very Merry Christmas. It’s so beautiful, honestly, it would fill your eyes with tears. I felt it was a sign from the universe.”

Writing wasn’t Ally’s first career, but her love of it started early. At 15, she had her first article published, while doing work experience at the Northern Standard in Monaghan. Then at 16, she had a week with the Irish Times.

“Then, when I was on my gap year in South America, I used to send articles to the Farmer’s Journal,” she says. “I’d come across an interesting food market in Chile and would draft an article and send it off. Sometimes they were published.”

She was a reluctant student of history at NUI Maynooth, and was delighted when, on graduating, she got an internship in a New York PR firm – before being transferred to London where she partied non- stop. Everything was going brilliantly, until her dad died.

“I thought, oh God, what’s it all about? I had to take time out and went to Paris where a friend had an apartment. I was feeling really lost, and grieving.”

Returning to her mother, in Monaghan, Ally started to write fiction.

“Cecelia Ahern had just brought out PS I Love You, and I was writing and imagining I was Cecelia and writing this novel which was going to be published. The house was freezing. I was wearing hats and scarves and walking around with hot tea. Then reality struck. I felt I had to do something, and I moved to Dublin and started temping. Eventually I got back into PR.”

And it was then that she met and married the writer and historian, Turtle Bunbury, and moved with him to live in a house on the family estate in Carlow.

Ten years later, after the birth of two daughters, Jemima and Bay, Ally dug out the novel she’d written and sent it off. Paula Campbell of Poolbeg Press published The Inheritance, and then a second novel, Infidelity.

Bubbly and light, in the style of Jilly Cooper, both were well received. But this third book sees her at the top of her game.  Holly, Ally stresses, is not based on herself, but she agrees they have some similarities.

“She was feeling directionless when she arrived at Knockboden, as I was when I arrived in Paris. the situations were different, but in a way, similar. She was feeling guilty having broken the heart of her fiancée, and I was grieving my dad.”

And Holly, like her creator, enjoys renovating a house.

“I can unblock a drain,” says Ally. “I’m very good at tiling, painting and plastering. I had to be because growing up in Monaghan we were four girls, and there were no boys, and we, literally, renovated the house over the years.”

Although All Wrapped Up is joyously exuberant, it’s not without its sad side. Holly’s dad left when she was small, and she’s never quite come to terms with it. Ally was 25 when her dad died, and she regrets, terribly, that she never knew him as an adult.

“I’ve spoken to many people about him, I feel I know him posthumously. I feel so much more at peace with it.”

She has nothing but praise for Turtle – she manages his historical projects and works with him most harmoniously.

“We used to write in the kitchen with him at one end of the table and me at the other. He has amazing discipline and focus and that has been incredibly helpful. And he’s so understanding,” she says. “Sometimes I get into a complete panic and say, ‘I can’t do this,’ and he says, ‘Win the moment in front of you,’ which is a quote he heard from Paul O’Connell.”

Ally has already written a novel to be published next year, and meanwhile, she can’t wait to start on the next one.

“My fingers are tingling,” she says. “I can’t wait to get going on new characters.”

Published in the Irish Examiner on 19th November.