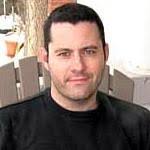 When Adrian McKinty won The Theakston Old Peculiar Crime Novel of the Year award recently, he was overwhelmed. The Northern Irish author is no stranger to prizes; his wins include The Edgar Award, the Ned Kelly Award and the International Thriller Writer’s Award, but the Theakston was particularly special to him.

“This is the biggest one,” he says, on the phone from his home in New-York. “I’d read four of the five shortlisted books, and they were so fantastic, I had dismissed the prize from my mind. So, to win it felt bizarre.”

It also validates his decision, taken three years ago, to have another try at writing when he had all but given up. McKinty had written a series, set in the North, based on an RUC Officer, Sean Duffy, in the eighties at the height of the troubles.

“The books would come out,” says McKinty, “They would be well reviewed, but no one would buy them, and then they would vanish. And I would be depressed for the next three months. I’d stare at the wall, and then go, well I suppose I’ll do it again, and I would, like a damn fool, and it would be the same result.”

McKinty had taken the scenic route to publishing. Leaving school, and his home in Carrick Fergus with no clue what to do, he took a Law Degree at Warwick University – clerking in London law firms in the summer breaks.

“But I hated it! Everything about law rubbed me up the wrong way. After three years, looking at the trajectory of going to a solicitor’s college afterwards, and joining a firm, I remember saying to my tutor, ‘I am in real trouble here. I’m so scared. I don’t want this to be my life.’”

He suggested McKinty should take a degree in philosophy; he did so, at Oxford University, and adored the course there. But he left with no firmer idea of what to do in life. Meanwhile, he met Leah – an American who has since become his wife – and he persuaded her to let him follow her out to New York. She studied, whilst he worked in menial jobs, before being employed as a librarian in the Medical School at Columbia University.

When Leah graduated, McKinty followed her to Denver, where she was teaching American Literature, and, wanting a new challenge, he got a teaching certificate and ended up teaching English. Each year, he asked his students to read five or six short stories before writing one of their own.

“One year the students said, ‘you are such a hypocrite. You make us do these things against our will – where is your short story?’ I said, ‘Ok. Next week I’ll bring one in.’ I wrote a noirish semi-autobiographical story, set in New York about a young illegal immigrant.  And it just grew and grew. Before I knew it, I’d written a novel.”

This wasn’t McKinty’s first foray into writing. He had penned some stories, essays, articles and reviews, but the novel quickly found a home. Critically acclaimed, Dead I May Well Be was shortlisted for a few awards.

His writing career continued, with the Sean Duffy novels, whilst the couple, after nine years, moved on from Denver, to Sydney in Australia. And that’s when everything came to a head.

“My wife’s teaching load was reduced, and we lost half of her income. My 6th Sean Duffy came out and was another flop, and I couldn’t handle it. We ended up getting evicted from our house. It was a big epiphany.

“I thought, you can’t provide for your family; you have been on a big ego trip for the past six years being flown to writer’s conferences and feted as a successful writer. But I wasn’t! It was all a big lie. I was selling 1,000, or 2,000 copies a year. The awards were all meaningless! I couldn’t keep a roof over our heads.”

So, he decided to give up writing. And it was back to bar work and Uber driving. He wrote a blog post about his decision, and settled down to his new life. Then a phone call changed everything.

“I’d had this call from Don Winslow, who had read my blog. He asked if he could give my books to his agent, Shane Salerno, but I heard nothing for four weeks and forgot about it. Then, during a bad time, I got home from driving the car at around midnight, having dealt with an unpleasant customer, when Shane Salerno rang. Talking a mile a minute he said I should not have quit. I was so tired, I thanked him, but said I’d made my decision. And I hung up.

“He rang back 30 second later, and I said, ‘Please don’t take this the wrong way. I’m going to bed.’ When he called a third time, I thought I’d better listen. He said, ‘Do you think you have an American Story in you?’”

It so happened that McKinty had. For years he’d been thinking of basing a book around exchange kidnapping – and allying it with the chain letters, promising bad luck if you broke them that he remembered from his teenage days.

“I made my pitch. I said, ‘A woman is driving to her cancer appointment in Boston when she gets a phone call from a frantic woman who tells her, ‘I am so sorry. I have some dreadful news for you. I’ve just kidnapped your daughter and the only way you are going to get her back is to do what I have done. You have to kidnap someone’s child and pay the ransom.’

“Salerno went weird and said, ‘Oh Adrian! You have to send me the book tonight.’” I explained that there was no book, no first chapter, just that pitch and he told me to go and write a chapter. I said I was going to bed because I had to be up for work, and, asking for my bank details he said he’s lodge 10,000 dollars into my account as an advance to my advance.

“I found myself at 1.15am, opening my computer. I ended up writing the first three chapters of The Chain. When I went to bed, and told Leah the story, she panicked and thought I’d been scammed. But then the phone rang, and Salerno said, ‘Those 30 pages are fantastic. All you have to do now is write 300 more.”

The chain is a stunning psychological thriller that leaves you reeling – and imagining what you would do if faced with such a morally difficult dilemma. It shows the aftereffects of the trauma – and does so in intelligent and interesting ways.

Bought in a six-figure deal, the book sold its advance before publication; it’s been optioned for a movie. McKinty has, since, written another Sean Duffy book, and has revelled at going being able to set the mood and the tone, with pages long descriptive prose – something that simply wasn’t appropriate in The Chain.

Halfway through his next American book – he admits that lockdown has hit him hard.

“When Covid hit I thought it would be perfect for me, but it’s been odd. I’ve found myself so distracted by everything that is going on. And until June we were home schooling. I spent three months trying to figure out calculus and quadratic equations.”

His future, however, looks bright.

“The Chain has made such a difference,” he says; and he’s not, just, talking about the financial security. “I’ve gained respect. When I write a new book and send it to a publisher it will be read, and that used not to be the case. That’s huge for a writer.”