A Journalist and Ghostwriter, Sue is the co-author of two recent number one bestsellers:  Whispering Hope, the True Story of the Magdalene Women, (Orion 2015,) and An Act of Love with Marie Fleming, recounting Marie’s extraordinary life, and fight for the right to die with dignity.(Hachette Ireland, 2014)

She has worked on eight other books as a ghost writer, two, for Penguin Ireland, were best sellers. She is the author of Keys to the Cage (New Island, 2010)

As a journalist, Sue has written for The Irish Times, the Irish Independent, the Irish Examiner, The Evening Herald, Image Magazine, and numerous other publications. A former columnist with the Evening Herald she currently writes the ‘Beginner’s Pluck’ book column for the Irish Examiner, and the Debut Roundup Column for Books Ireland. She has interviewed countless authors, including eleven winners of the Man Booker Prize. 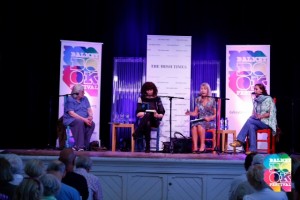 She teaches Freelance Journalism, and Ghostwriting at The Irish Writer’s Centre , IEL Abroad, and on line, and gives one to one tuition on both subjects. She also hosts  public interviews, including at The West Cork Literary Festival where she has interviewed  Zadie Smith and Nick Laird, Fay Weldon, Anne Enright, Paula Meehan, John Boyne, Patrick Gale, Kit De Waal, Kate Mosse and Linda Grant among others.

Sue is represented by Sallyanne Sweeney of MMB Creative.